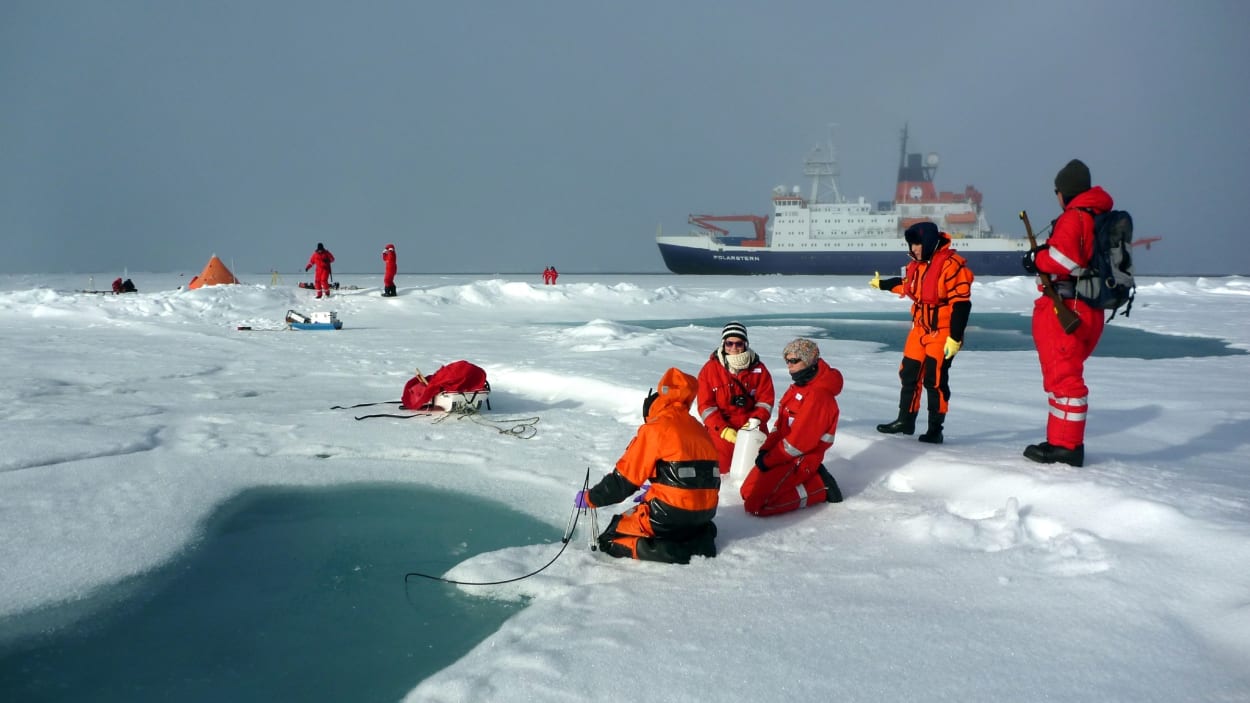 Up to 12,000 particles per litre, most small enough for tiny marine organisms to eat, researchers find

Sea ice from the remote Arctic Ocean may look clear and pristine, but up to 12,000 tiny pieces of plastic may be embedded in a single chunk small enough to sit on your hand, researchers have found.

Researchers from the Alfred Wegener Institute in Germany identified 17 kinds of plastic in the ice of the Transpolar Drift and the Fram Strait and near northeast Greenland in 2014 and 2015.

Among them were the types used in plastic bags and bottles, paint, fishing gear and cigarette filters. Some of the highest levels of microplastic were likely carried into the Arctic from the massive garbage patch in the Pacific Ocean, the researchers reported Tuesday in the journal Nature Communications.

The concentrations in the ice are hundreds of times higher than any found in seawater so far, even though the researchers didn’t include microfibre particles in their counts, said lead author Ilka Peeken. However, part of that may be that in this study, the researchers measured particles as small as a sixth the width of a human hair — smaller than in previous studies, Peeken said.

Most of the particles are small enough to be eaten by the little marine organisms that live in sea ice, suggesting that high concentrations of microplastics could potentially be entering the Arctic food chain.

« That would also get further up the food chain. That’s why it’s important to know we have small particles there, » Peeken said, adding that the potential health risks are unknown.

The study also suggests that when the ice melts, it will release large amounts of plastic into the Arctic Ocean.

The researchers collected five ice core samples over the course of three expeditions aboard the icebreaker Polarstern.

The highest concentrations of microplastics, about 12,000 particles per litre, were found in an ice floe from the Makarov basin, which is thought to contain frozen water that originated in the northeast Pacific ocean.

That sample contained almost exclusively polyethylene, the plastic found in plastic bags, bottles and packaging, and the researchers suggest that it likely originated from the Great Pacific Garbage Patch, a floating aggregation of 79,000 tonnes of plastic garbage over a 1.6 million square kilometres.

Peeken says not only is it the most common plastic produced worldwide, but it’s also very light.

« I think a lot of other particles might eventually sink in the water column, but this particular one has the tendency to stay afloat. »

Ice floes containing water from Siberia tended to contain more paint from ships and nylon from fishing gear, the study found. That could point to an increase in local sources of plastic as climate change causes the sea ice to melt and opens the Arctic ocean to more ships and fishing.

The researchers are hoping to do a similar analysis on older ice cores to see if the amount of plastic has grown over the past decade, said Peeken.

Because there’s no standardized method for measuring microplastics yet, she added, it’s hard to compare different studies at the moment.

However, what’s consistent is the evidence that microplastics from cities far south are being carried by ocean currents and sea ice into the remote Arctic.

« We now know that we have a lot of this human imprint in areas where it certainly doesn’t belong, » Peeken said.

She hopes the research pointing to the routes the plastic is taking will help lead to ways to stop it, through methods like cutting back on the use of plastic and possibly banning certain kinds of plastic products.