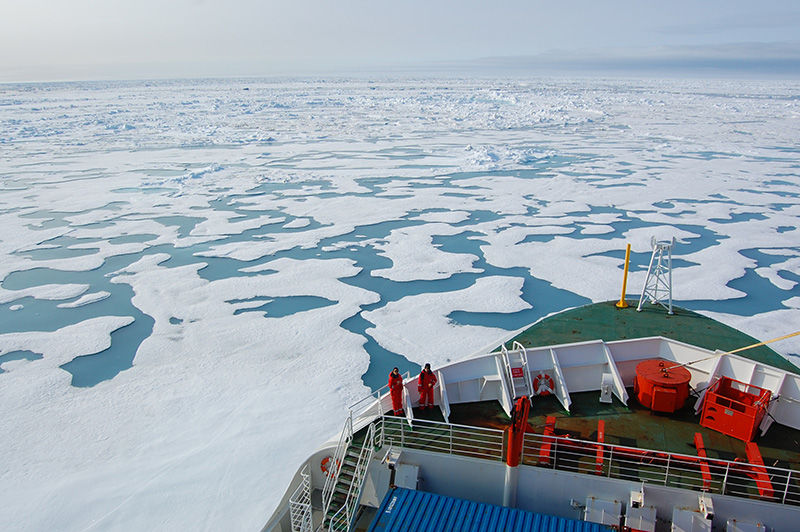 Initial findings hint at the complexity of currents in the North Atlantic that drive the world’s weather.

The North Atlantic Ocean is a major driver of the global currents that regulate Earth’s climate, mix the oceans and sequester carbon from the atmosphere — but researchers haven’t been able to get a good look at its inner workings until now. The first results from an array of sensors strung across this region reveal that things are much more complicated than scientists previously believed.

Researchers with the Overturning in the Subpolar North Atlantic Program (OSNAP) presented their findings this week at an ocean science meeting in Portland, Oregon. With nearly two years of data from late 2014 to 2016, the team found that the strength of the Atlantic Meridional Overturning Circulation — which pumps warm surface water north and returns colder water at depth — varies with the winds and the seasons, transporting an average of roughly 15.3 million cubic metres of water per second.

The measurements are similar in magnitude to those from another array called RAPID, which has been operating between Florida and the Canary Islands since 2004. But scientists say they were surprised by how much the currents measured by the OSNAP array varied over the course of two years.

“We’re delighted with the data,” says Susan Lozier, an oceanographer at Duke University in Durham, North Carolina who is coordinating OSNAP. “We always find more complexity and more variability, but perhaps that shouldn’t be surprising given how under-sampled the ocean is.”

OSNAP consists of 53 moorings festooned with instruments that measure water conditions including temperature, salinity and current speeds. The array also includes sensors that drift with the currents and autonomous vehicles called gliders. The entire network extends from southern Labrador in Canada to the southern tip of Greenland and on to the Rockall Trough off the west coast of Scotland (see ‘Sea sensors’). These are regions where surface waters travelling north begin to cool and sink into the deep sea before turning south towards the Equator.

The array was designed to help answer fundamental questions about what drives this overturning circulation, which transports heat from the tropics to the poles. Climate models suggest that the formation of cold, deep water in the north may slow down as the climate warms. This would affect weather patterns in northern Europe and beyond, and some research suggests that this process may already be under way.

The RAPID array has registered a decline in the strength of this overturning circulation since 2008, including a 30% drop from 2009 into 2010. A study2 published in Geophysical Research Letters on 12 February suggests that this slowdown is part of a longer-term pattern of climate variability across the north Atlantic, and not caused by global warming. Teasing a potential climate change signal out of the observations could take time, in part because the natural swings in the system are so large, says lead author David Smeed, an oceanographer at the National Oceanography Centre in Southampton, UK, who is involved with RAPID.

Researchers can’t fully understand this slowdown without knowing what’s happening in the North Atlantic, which drives the system. That is what makes OSNAP so important. Smeed says that the array has proven its worth and is already providing insights about how the currents work in this critical region.

Lozier hopes that OSNAP will eventually settle a long-standing fundamental question about what powers this system of currents: how much of the overturning circulation is driven by the winds and how much by the formation of cold, dense water that sinks into the deep sea.

Since the array started collecting data, the North Atlantic has experienced two cold winters in a row. The data indicate that the ocean released a large amount of heat into the atmosphere, forming a lot of chilly water as a result. But to what extent its formation actually had an impact on the strength of the overturning circulation remains unclear.

Lozier wants to see how the overturning circulation responds during a warmer winter that produces less cold water in the region. And she may be able to find out when the team collects a second round of data later this year. “We just need to keep measuring,” Lozier says.