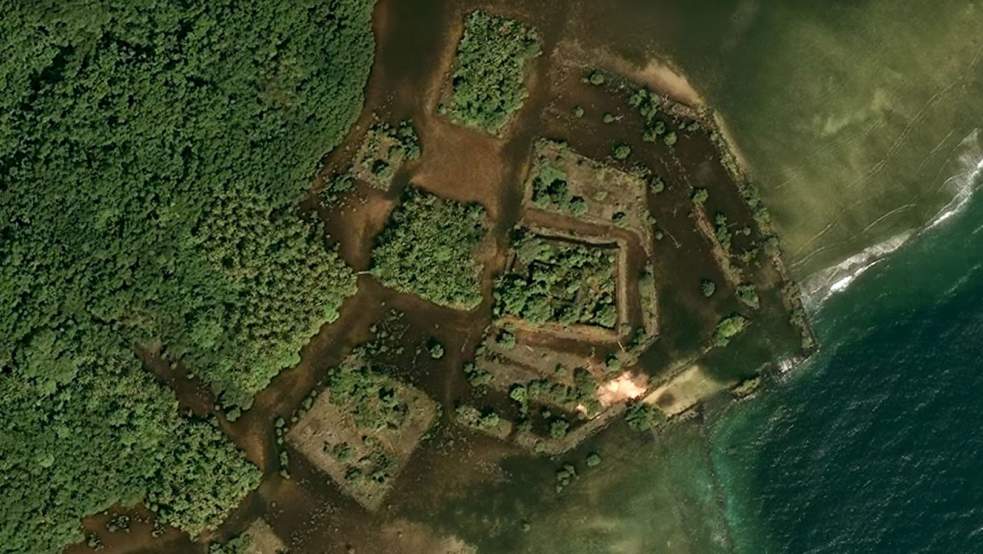 The ancient complex of Nan Madol on the island of Pohnpei in Micronesia has fascinated visitors for centuries. Now, thanks to satellite technology, researchers have captured the ruins from a perspective that’s rarely seen.

As Yahoo 7 reports, the new aerial footage debuted on an episode of the Science Channel series What on Earth? In the recent installment, experts discussed Nan Madol, a chain of intricate, human-made islands that is sometimes called the « Venice of the Pacific » and is a UNESCO World Heritage Site. The name Nan Madol means « spaces between, » a reference to the network of canals connecting the ruins.

The 100-odd blocky stone structures were built atop coral reefs in a lagoon off a remote island in the western Pacific Ocean. The walls of the artificial islands can reach up to 25 feet tall and are 17 feet thick in some parts. In total, the rocks that make up the site weigh nearly 827,000 tons. Archaeologists believe that portions of the city have been there for more than 1000 years, and that the site once served as the ceremonial, political, and residential hub for the native Saudeleur people. Little is known about how its builders were able to move such massive amounts of stone without levers, pulleys, or metal.

Today, the Micronesian island of Pohnpei is home to 36,000 people, and even among locals, the landmark is notorious. Legends of spirits haunting the area have earned it the nickname « Ghost City. » The ruins give off such an eerie vibe that H.P. Lovecraft used them as inspiration for the home of Cthulhu in a short story.

The abandoned city of Nan Madol teeters on the edge of the Pacific island of Pohnpei. Learn more: https://t.co/7pmPF5p3WC #WhatonEarth pic.twitter.com/NfJjVBox1W