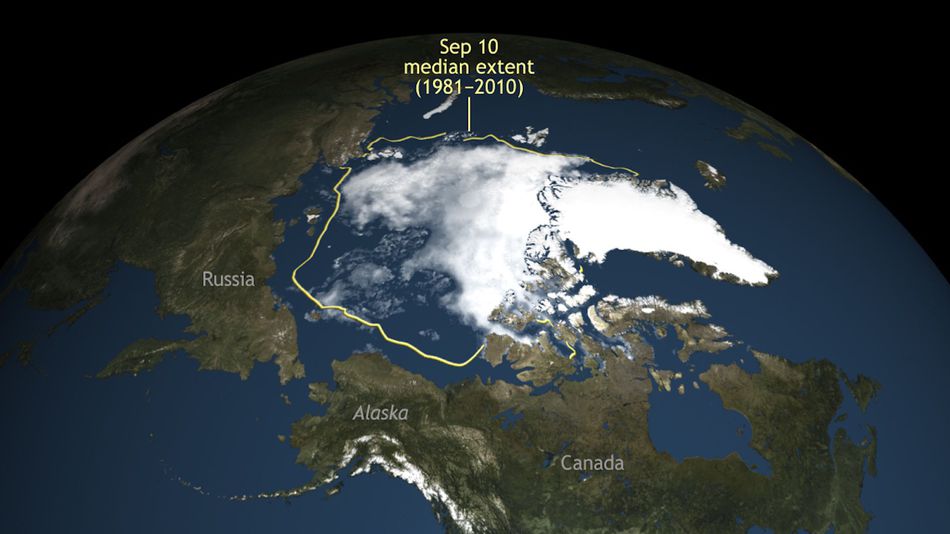 Something strange and unnerving is happening in the Arctic: A chunk of sea ice bigger than the states of Alaska and Texas combined was missing from the sea ice cover at the end of October.

And now as we head into Thanksgiving, sea ice is still sitting at record low daily levels, with air temperatures so far above average that they go off the charts on some weather maps.

Daily sea ice extent has been at a record low level nearly every day from mid-October to Nov. 16, and there are few signs that this pattern will end soon.

A looking at changing #Arctic sea ice concentration from 9/1 to present. The colored lines indicate the 1980/1990/2000 average extents pic.twitter.com/9KUbsJTyvn

Sea ice is missing from the Barents and Kara Seas in particular, which are on the Atlantic side of the Arctic Ocean.The fact that the Arctic climate is showing signs of distress isn’t new, given that the region has been warming at twice the rate of the rest of the world, with sweeping impacts from sea ice melt to potential changes in weather patterns across North America and Europe.However, the conditions in the area that serves as the Northern Hemisphere’s freezer stand out even against the backdrop of long-term climate change and short-term weather patterns, which can be highly variable. 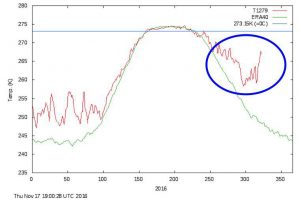 “The persistence of these anomalous temperatures in the Arctic is unusual,” said Zack Labe, a graduate student studying Arctic climate at the University of California at Irvine. Labe has been exchanging charts for weeks with other scientists via social media, marveling at just how rare the current conditions in the Arctic are.In a Twitter message, Labe told Mashable that unusually mild sea surface temperatures across parts of the Kara and Barents seas are preventing ice from forming there, even though air temperatures are below freezing. 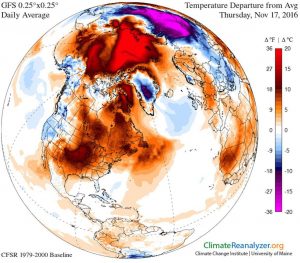 With such a late freeze-up, the ice may be precariously thin when the summer melt season arrives.

“This may have implications going forward into the 2017 melt season.”

The slow growth in sea ice this winter is in part a legacy of the near-record ice melt during the summer and fall of this year, with sea ice reaching the second-lowest extent on record in late September.

Ice cover was so scant that a sailboat with little ice protection at all managed to circumnavigate the Arctic — through the Northeast and Northwest Passages — without getting stuck in an ice floe. 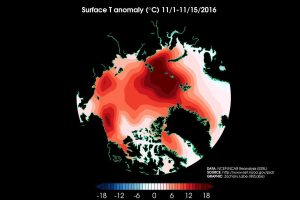 Areas of open water absorb more of the sun’s incoming radiation compared to ice covered regions, making them heat up and release more water vapor into the atmosphere. These waters take longer to cool back down once the Arctic winter sets in, thereby delaying ice formation, and the evaporation that takes place can also warm the atmosphere.

“The ocean has got to lose that heat,” says Mark Serreze, the director of the National Snow and Ice Data Center (NSIDC), in Boulder, Colorado.

In addition to this, weather patterns seem to be stuck in a rut, continuously favoring unusually warm conditions in the Arctic, while a vast expanse of land from Siberia to eastern Asia freezes. 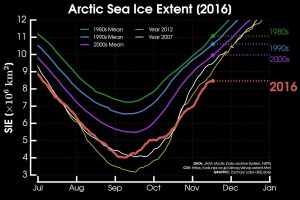 “There is a double whammy here,” Serreze told Mashable. “Ice growth is slow because of the high sea surface temperatures and the atmospheric circulation bringing in the heat.”

According to Serreze, last fall and winter were also “extremely warm” compared to normal, making this late-year spike stand out even more. “It is kind of unusual to have this second go around of this,” he said.

“There are some pretty crazy things going on in the Arctic right now, and we’re still trying to figure it all out.”