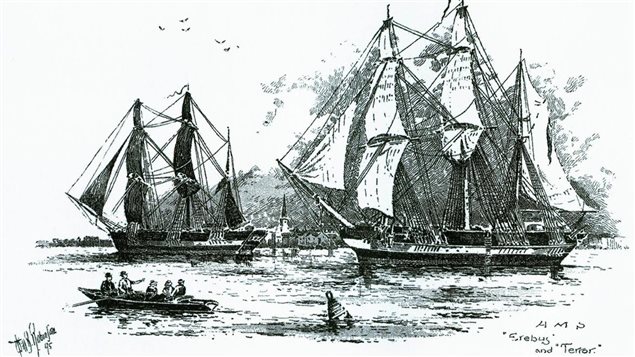 Wreck located in Nunavut’s Terror Bay, over 90 km south of where ship was believed to be abandoned

A video shared with CBC News and produced by the Arctic Research Foundation appears to show images of the submerged HMS Terror — one of British explorer Sir John Franklin’s two ships lost in the doomed 1845 Franklin Expedition — in a Nunavut bay.

On Monday morning, British newspaper the Guardian reported that the ship, which was abandoned in sea ice in 1848 during a failed attempt to sail through the Northwest Passage, was found « in pristine condition » in Nunavut’s Terror Bay, north of where the wreck of HMS Erebus — the expedition’s flagship — was found in 2014.

The crew of the Arctic Research Foundation’s Martin Bergmann research vessel found the shipwreck, with all three masts standing and almost all hatches closed, on Sept. 3.

« Resting proud on 24 metres of water, we found HMS Terror — 203 years old, it is perfectly preserved in the frigid waters of the Northwest Passage, » Arctic Research Foundation spokesman Adrian Schimnowski says in the video.

« We spotted two wine bottles, tables and empty shelving. Found a desk with open drawers with something in the back corner of the drawer, » Schimnowski told the Guardian by email.

A statement issued Monday afternoon by Parks Canada said the organization « is excited about the reports of the discovery of the wreck of HMS Terror. »

« The discovery of HMS Terror would be important for Canada, reflecting the ongoing and valuable role of Inuit traditional knowledge in the search and making a significant contribution to completing the Franklin story.

« Parks Canada is currently working with our partners to validate the details of the discovery. »

John Geiger, the CEO of the Royal Canadian Geographical Society, congratulated the crew of the Martin Bergmann in a statement Monday afternoon.

« This is tremendously exciting news, » said Geiger. « The nature of the find, as reported, underscores also the vital role of the Inuit then and now in the Franklin saga.

« After the discovery of HMS Erebus two years ago, the Terror remained the largest missing piece of the puzzle. Together, these discoveries have the potential to alter forever our understanding of the Franklin expedition’s disastrous end. » 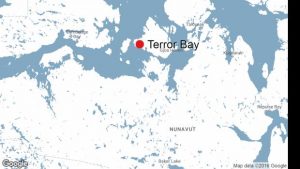 As the story goes, HMS Terror was trapped in ice somewhere between King William Island and Victoria Island. According to the Guardian, the ship was found 92 kilometres south of there, a discovery that could have implications for historians’ understanding of Franklin’s expedition.

The doomed expedition, abandoned 168 years ago, resulted in the deaths of 129 men. The Erebus and the Terror lay locked in ice and undiscovered until a public-private group of searchers, led by Parks Canada, found the wreck of the Erebus two years ago.

The Guardian reported that the wreck was found after the Martin Bergmann’s crew detoured to Terror Bay after hearing a story from an Inuit crew member, Gjoa Haven’s Sammy Kogvik. 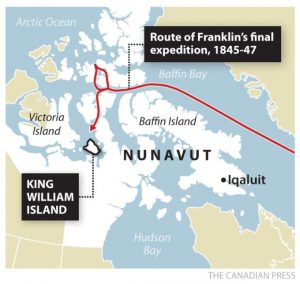 Kogvik told the crew that he noticed a large piece of wood sticking out of Terror Bay’s sea ice which looked like a mast, while on a fishing trip about six years ago.

« I was on my way to the lake to go put nets out, » Kogvik said in the Arctic Research Foundation’s video. « And when we got in the bay … as I was getting off the snowmobile, I looked up to my left, and there was something weird sticking out of the ocean on the ice.

« And I told my hunting buddy, ‘what is that sticking out of the ice?’ And he didn’t know. »

HMS Erebus was also located with the help of Inuit oral history. Historian Louis Kamookak helped researchers pinpoint the location of the wreck after passing down oral tradition saying that one of the ships was crushed in ice northwest of King William Island, while another — later confirmed to be the Erebus — drifted farther south, where it was ultimately found.

« Every time there’s a finding, it’s kind of a sad feeling, » Kamookak said. « I think the mystery’s more fun than the actual knowing. »

The bell from the Erebus was one of the first items recovered after it was located, with a cannon, ceramic plates and personal effects among other items found.

Parks Canada had already agreed to seek permission from Nunavut’s director of heritage before divers remove any HMS Terror artifacts.

One mystery still remains: the location of Franklin’s grave. Kamookak said according to Inuit oral tradition, Franklin was buried in a vault somewhere on the north part of King William Island. 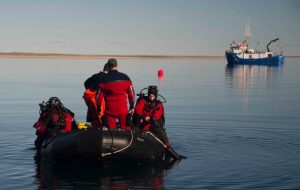