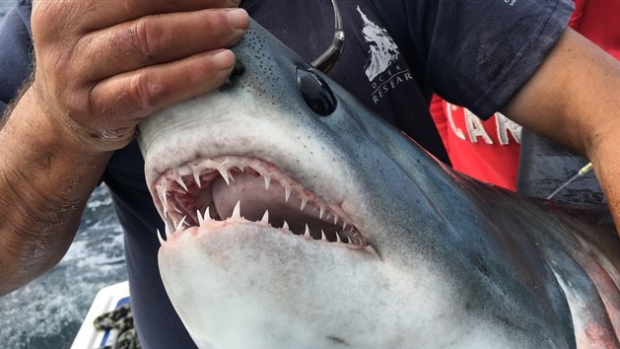 Researchers are concerned about the declining number of sharks in North Atlantic waters, pointing to a combination of climate change, overfishing and commercial fishing techniques as causes.

Warren Joyce, a researcher with Fisheries and Oceans Canada, said the decline is a worldwide phenomenon.

« I think it’s urgent. Currently, shark populations all over the world are in decline, » said Joyce.

« They’re being fished in international waters, mostly for illegal shark finning … where they remove the fins for delicacies in Asia. »

Joyce said he feels the stakes are high.

« Sharks are the top predators in the marine environment, so if we do remove these animals from that ecosystem, it’s going to have some very drastic effects, » he said.

« It could wipe out some species, or some species could explode or wipe out others. We really don’t know but it could be a big problem if it does happen. » 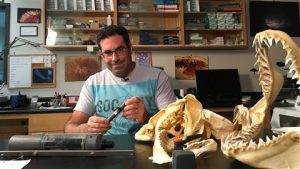 Gaetan has noticed the water has a green tint this year, something he hasn’t seen since the late 1990s.

« Green water doesn’t really bring in any kind of fish, we like to have the blue water, » he said.

Manuel Dureuil, a researcher at Dalhousie University, said in an interview with Radio-Canada the green water is caused by a higher number of phytoplankton.

He said the phytoplankton population is growing because of warmer waters brought on by climate change.

The green colour and the warmer temperatures are unappealing to sharks, he said.

Atlantic Canadian waters are home to 20 species of sharks, and it’s estimated there are currently between one and two million sharks swimming in the North Atlantic.

Some Maritime fishermen consider sharks a nuisance, because they often accidentally catch them while looking for other fish.

Swordfish and tuna fishermen, such as Marven Stoddard, use a technique called longline fishing, which comprises of setting a line up to 120 kilometres long with hooks at every 10 metres.

He said when a shark is caught on a hook, the fisherman has to cut a part of the line because it wouldn’t be safe to reel it on board. 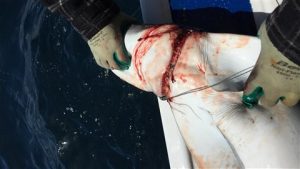 This leaves the hook in the shark’s mouth.

Gaetan said he catches at least one shark a day injured by commercial fishing lines.

« I’m not calling for an end to longline fishing. Everyone has to make a living, » said Gaeten.

« However, I think that in 2016, throwing hooks in the ocean with bait and hoping to only fish the kind of fish you want is impossible. » 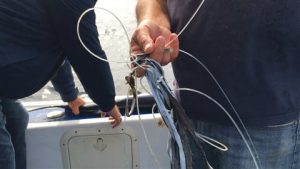 According to Fisheries and Oceans Canada, these commercial fishermen are not doing anything illegal as long as the shark remains alive in the ocean.